Have a sick kid at home is never easy, ever.

Having this kid be the youngest in the family who battles with communicating is even harder.

So, a warning to the next person to tell me, “Ag parenting is so easy, you just make sure they’re clothed & fed and boom you’re done” be aware, I WILL THROAT PUNCH YOU!

The last week has been a rough one in our household, its never always smooth sailing but we can deal with a few waves every now and then, but this week was a full on Tsunami in Thomasville.

The washing pile has been growing, the amount of cooked meals has been decreasing, the amount of sleep Carl and I have been getting has been 3 – 4 hours max and all because PARENTING IS CHALLENGING. Parenting is definitely not for the weak.

Since last week I’ve been researching what could be causing Josh’s change in sleep routine which in turn has led to him being overly miserable, not wanting to eat, being very teary, attached to me, this stupid niggling cough and then the snotty nose. Through all this however he was perfectly fine during the day, it was just at night that all hell broke loose until Monday.

The day started with Josh waking up in a bad mood (yes a miserable/ bad mooded/ grumpy 1 year old) and it just never got better.

Monday night he was overly tearful and his small cough had developed into a wet ugly flemy hoarse cough, followed by uncontrollable snottiness (how visual). Bed time was a challenge, he woke up every 15 min coughing and crying. Clearly the cough meds were not doing their job and my little one was in pain. Poor baby. Eventually we put him in between us for the night, and he settled, until we were woken up with vomit everywhere. Bedding, in his hair, on his clothes, on my clothes. This was then followed by a blur of lights on, running around, grabbing towels, changing everything, cleaning him, checking temperature – 40.7°C – CRAP, giving meds, giving him milk (attempting to keep him hydrated) and then trying to get him to settle again, but a fever in my boy causes uncontrollable twitching which wakes both him and I up, so getting him to settle was near impossible.

As you can imagine the minute my alarm went off at 05:15am I knew there was no chance in hell that I could take him to school or that I could organize someone to babysit him. Did the good thing, contacted my Boss (who was luckily awake and diving in beautiful Durban) and reported my absence from work. Then the clinging phase kicked in, every move I made he screamed “Mommy” which meant consoling him and reassuring him that I was not going anywhere. I don’t think he believed me and proceeded to climb onto my chest and laid there sweating, vomiting, crying, snotting and twitching until I eventually rolled him off me while waiting patiently for the clock to strike 08:00am so I could call the doctors rooms and make an appointment. 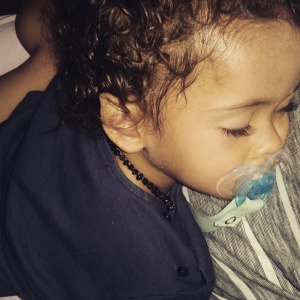 Off to Doctor we went where the prognosis was bronchitis, poor boy, followed by a short costly (R358 later) stop at our local pharmacy and back home to force feed Josh yoghurt and then proceed to pin him down (this kid is strong and will fight anyone who tries to medicate him) and get 4 different meds into his mouth and 1 bullet up his marshmallow. Not pleasant for either of us. We then spent the day with him attached to my chest or on my lap or next to me in the car while fetching Danny (in his car seat, obviously, but that also meant figuring out how to move the seat from the back to the front with him attached to me) all while managing to oversee Danny’s homework, do a load of washing and make supper until Daddy came home just before 19:00pm, I’ve never been that happy to hand him over for 5 min while I make up my bed in peace.

Don’t get me wrong, I don’t mind doing all of these things and its not a everyday thing but when the bad days hit, it hits hard. Parenting is not always about the easy things, it takes A LOT of hard work, A FEW tears (from both Parents and kids), an INSANE AMOUNT of patience and UNENDING love.

So I’m back at work today while Ma Ron has stepped on duty, God bless Grandparents and modern medicine and Olbas.

0 thoughts on “When sickness strikes”